Back In The Saddle


Why hello there! Fancy meeting you here…after all this time. Sorry for the long wait. Hard to believe it’s been almost 2 years since I’ve posted to this blog. And sadly, that was a very sad post.

So much has changed in the last 2 years, and so much is yet to happen.

Sadness in the Kate household. I am heartbroken. Numb.

I'm mourning the loss of the sweetest, cutest little thing that has ever come into my life. I know there will never be another like her. 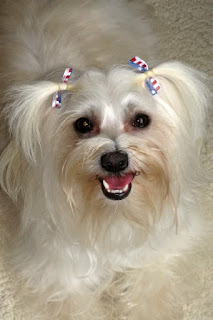 After the death of the family dog, a loveable Cocker Spaniel named Tucker who lived to the ripe old age of 17, we decided to adopt a small dog. One that could keep us company, travel with us in our new empty nest way of life. We tried for the longest time to adopt a dog from a shelter or animal rescue. Infuriatingly unbelievable walls and doors of ignorance stood in our way.

I was frustrated and shocked that we were turned down time after time.

One day, I heard of a local groomer/breeder who had a beautiful little Havanese puppy available for adoption. It was an answer to prayer.

Operation: Bring Up To Speed

Up to speed: Performing at a desirable level.

So, yes, I desire to perform at a fast level. Somehow I'm going to cover my the comings and goings, the ups and the downs, the stops and the starts of my life so far in 2014 and keep it as brief as possible....

I'm still working part-time at a local University. Hubby is back to work doing what he does best: driving the big rigs.  We both like what we're doing. Except for the working different shifts part. I kind of liked spending lots of time together thanks to the dual-layoffs. We've never had that before and I was worried about how we'd be when we finally spent more than a weekend together at a time.

My job is so diverse. I get to plan events and field trips for college students. Really like my bosses. They have given me lots of flexibility and space to get the job done. There's a possibility that I'll be taking on another part-time job on campus. Could really use the extra money! I like working in a school again. Such a different vibe than corporate America. I'm even thinking of going back to school and finally getting that Bachelor's degree on my resume.

The grandkids and son are still living with us. And its still a strain. Little house with lots of people equals semi-controlled chaos. My second job is now being their daycare provider. I rush home from work every day to watch them when my son heads off to work.

This year hasn't been all that bad. At least hubby and I started the year off employed! What a concept! Our health has been ok. Just small annoying things to deal with. And speaking of health, I'm happy to report that our dog Sammi is doing fine after her health scare last year.

Though times are still a bit tough, we did manage to get some travel in. First up was a weekend in Newport to celebrate our 33rd wedding anniversary. If you look back in my archives you'll find 2 posts that I managed to write about the fabulous time we had! Then I went away for a weekend with a friend of mine to a conference for a hobby we share. I also wrote a post about that special experience. See archives. Not long after that, I received a surprise phone call on my way home from work one day - I had won a trip for 2 to Las Vegas! Hubby and I had a blast! (Details of that little jaunt will be in a future post.) A month later, we flew to Florida for a conference and visited with our oldest son. (I'm going to try to put together a post for that excursion, too. Just you wait and see!)

I also made sure to take in a few concerts this year. Music is energy for my soul so you just know I can not go too long without refueling. And speaking of music, I continued my role on the board of directors for the RI Music Hall of Fame until last month when I handed in my resignation with a heavy heart. I did a lot of soul searching and decided that I needed to step away. There were so many reasons but I probably won't be writing a post about that decision. So just take it from me, the time had come for me to end that phase of my life and move on.

And I said goodbye to my beloved Mustang convertible...it's been re-homed. It's been so hard to hold it together, but it was for the best.

Please take a moment and visit the site for the RI Music Hall of Fame!